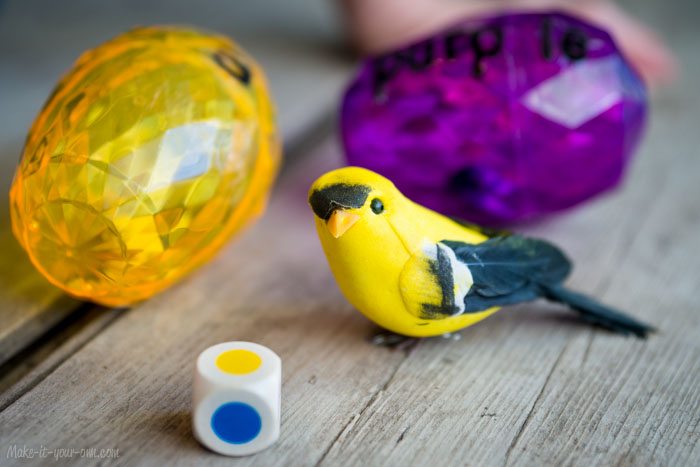 This is an activity to get young children familiar with both colours and how to use a die (which is helpful in playing various games and learning math concepts such as probability).

The first portion of the activity allows the child to get familiar with the skills they will need for the game ahead.

Roll the die. Whatever colour that it lands on, have the child select that colour of both egg from one basket and bird from the other.  Place the bird in that egg.

Once the child has mastered that concept then it is time to proceed to the game portion.  You can play with two or more people or in teams should the children that you are playing with need assistance.  It is important that you have space to organize yourself for this game so you might want to play on a carpet or large table.

Before you play the game introduce the second die.  It will have a star sticker on one side (for younger children you may want to add an additional one or two to increase the likelihood of the exchange portion of the game).  You can play this portion of the game in two ways: When the player lands on the star sticker (s)he may chose a bird or egg from another player or it can be a chance for players to trade either a bird or egg with each other (see the Variation section).

Let’s get started!  Each player will roll both the dice.  They will get to chose either an egg or a bird based on the colour that they landed on.  (The goal is for you to get as many matches as possible throughout the game.)  They will then place this in front of themselves in order to stay organized.  If they rolled a blank spot on the second die then it proceeds to the next player’s turn.  If they rolled the star then they may chose a bird or egg from another player (if they have one that works) or it may be a time for players to exchange colours to work cooperatively (you will see why with our later variation!).  Continue in this manner until all the birds and eggs are used up.  The winner is the player with the most matches.

Variation:  We decided that we would play the game, but add a fictitious player.  We drew a fox and pretended that we were playing against the fox in a manner.  Each player took their own turn but when it came to the fox, we rolled for the fox.  When a player got a star we traded eggs or bird so that a player could win instead of the fox, working cooperatively.  When it was the fox’s roll and we landed on the star we had to be fair and assume the character of a sly (and hungry) fox, trying to outsmart the team.  It was rather fun!

Which version did or would you and your children or classroom be more attracted to?

Becoming familiar with the use of a die, matching corresponding colours in different materials, game play etiquette (taking turns etc.)

As dice can be choking hazards, be sure to keep them out of reach from young children (Ages 0-3)